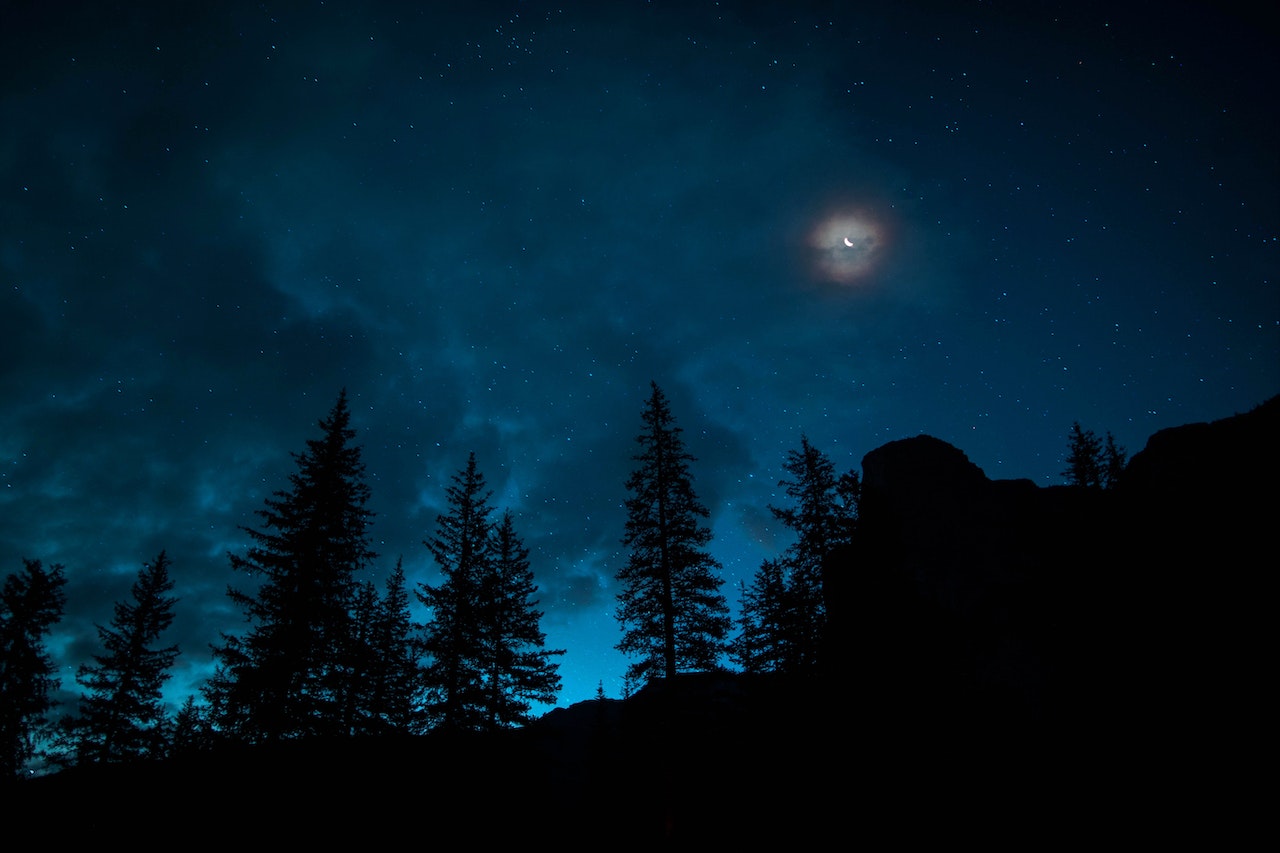 Chapter 35: The Time is Near

They reached the old ruins of the pallipadai. They left Vandhiyathevan and his horse near one of the inner walls. Ravidasan said, “You stay here. We will call you when the time is right. Do not even think of escaping. These forests are dense and only those who know the way can pass through them.”

“And even if I do try to escape, you will invoke your magic and kill me, won’t you?,” laughed Vandhiyathevan.

A fox howled in the distance. And a chill ran through Vandhiyathevan’s spine. Ravidasan was right. The forest had indeed been dense. So dense, that even the rain had not penetrated much. Vandhiyathevan took off his waist cloth, which was still slightly damp, and draped it on a rock nearby, and sat down on another. He leaned on the wall. There was one guard to watch over him. The rest of them had sat in a semi-circle a little distance away. They extinguished all, but two of the torches. They brought out an old throne from inside. The child they had been calling Chakravarthy, was made to sit on the throne.

“The Queen has not come here yet,” said Ravidasan.

“She will come at the right time. I had asked her to come only in the second jaamam of the night,” said Soman Sambavan. “Let us spend the time by singing patriotic songs until then.”

Idumbankari took out an udukku, and slowly meted out a beat. Devaralan started singing an eerie song. Vandhiyathevan realised that the song was about the war that had happened in that very spot. The great war where Varaguna Pandian fought against Aparajita Pallavan. Gangamannan Prithiveepathi was on the Pallava side; and had perished in this war, along with lakhs of other brave soldiers. This pallipadai had been built in memory of this brave emperor. Without the support of the Gangamannan, the Pallava forces started fleeing. At that time, the Chozha forces, headed by the great Vijalaya Chozhan, came to the aid of Pallava forces.

The devaralan sang in great detail about the bravery of the Pandiyan forces. The rest of the crowd were sniggering and enjoying scenes of the Pallava forces being decimated.

The beats of the udukku stopped abruptly. Devaralan stopped his song as well. They could see torches at a distance. A palanquin could be seen. It came closer and stopped near where everyone was sitting. The screen opened and the Pazhuvoor Queen Nandini stepped out. Earlier when Vandhiyathevan had seen her, she looked like a sarvaalankara-bhooshani (one who was bedecked with every type of jewellery). Now, she looked different. Her hair was untied, and she looked like the fierce Durga Devi.

Vandhiyathevan shuddered and a chill ran down his spine.

She looked at the child on the throne and walked towards him. The lady whom the child had addressed as Amma stood behind the throne.

“You are my real mother, aren’t you? Why does this lady behind the throne say that she is my mother?”

Nandini smiled and replied, “She is the mother who brought you up. I am your real mother.”

“Why did you not take care of me? Why did this lady bring me up in a remote mountain cave?”

Nandini sighed. “All this is to keep your father’s promise. We need to take our revenge against those who killed your father.”

“Yes. I know and understand that.”

She walked back towards the throne and kept the sword next to the child.

“Amma, can I take this sword in my hand?”

Nandini shook her head softly and said, “Not now, child. Be patient for just a little while more.”

She looked around at the others and said, “I hope only those who have taken the oath are here?”

“You will laugh today, but I am visualising how we will all be feeling, around the same time, next month.”

“We are waiting for that day.”

“It is good that we have been patient so far. We are a small group of people, and our Chakravarthy is still young. We are now nearing the time of reckoning for our plan.”

“Can you please explain further, Devi?”

Everyone in the group looked intently at the Queen.

“Some of you have doubted my allegiance to the oath. In the last three years, I know that I have been thinking of nothing else but our mission, day and night. Every waking minute, I have been planning and scheming. I have had no other thoughts in my mind. There are now two factions in the Chozha empire. One group headed by the Pazhuvettarayars and Sambuvarayar are proposing that Madhuranthakan be made Emperor. General Boodhi Vikramakesari and Thirukoviloor Malayamaan are against it. I am hearing that General Vikramakesari is planning to raise an army from the South and move towards Thanjavur. I got word that Malayamaan is raising an army as well.”

“Devi, we are also hearing of peace talks that are going to be held in Kadambur?”

“Yes. I planned that as well, and am headed there. Can you not understand why I am engineering that?”

“No, we are not able to figure that out. The depth of a woman’s mind is something even the Lord cannot decipher.”

She laughed and continued. “This confrontation between the two factions cannot happen before our mission is completed. Sundara Chozhan is still alive. Anbil Brahmaraayar is also there. These people are capable of pacifying the parties temporarily. We need to achieve our goal before that. And then this internal feud will continue forever.”

Everyone in the crowd, including Ravidasan, wasere surprised and astonished at the level of planning and shrewdness of Nandini.

“We are impressed, Devi, at the level of your scheming. But pray tell us what you meant, when you said the day of reckoning is near. What is going to happen? Who will do what?”

The group roared in excitement.

Vandhiyathevan could only see that Nandini had said something to induce that excitement. He could not hear what she was saying.

“Devi, what you said fills us with joy. We did not expect that the day to finish off our number one enemy would be so near. Pray tell us, who will do the honours?”

“It is natural to compete amongst ourselves for that honour. That is why I had asked for our Chakravarthy to be brought here. He will take the Pandiya long sword and give it to one of us, and that person will be the chosen one. The rest will be around to help. I will be in the Kadambur palace at that time. Idumbankaari will be part of the guard. We will ensure safe entry to those who need to come in, to finish the job. Hope this plan is ok with you all?”

The crowd looked at each other and nodded. No one seemed to have any objection.

Ravidasan said, “I think we are all in agreement. There is one more condition that we all need to agree to. Whoever is the chosen one will be our leader until our Chakravarthy comes of age. Each and every one of us has to obey the leader.”

Nandini smiled and said, “Does that rule apply to me as well?”

She smiled and said, “I am in agreement. I hope everyone else is in agreement to the second condition as well?”

There was a murmur of disapproval amongst some.

Soman Sambavan spoke at last, “How can it be proper that Devi is also treated like everyone else. She has been the one who has been helping us so far.”

“Do not worry about me. Since the day I saw Veerapandiyan being murdered in front of my eyes, I have dedicated my life to this cause. I am more than willing to obey whoever finishes our enemy number one.”

Nandini walked over to the makeshift throne. “Kanmaniye, take this sword and give it to one person in this crowd whom you like very much.”

Ravidasan added, “Chakravarthy, please give the sword to the one whom you think is the bravest in this group.”

Every eye in the crowd was on the Child Emperor. There was a palpable silence. The child looked around a few times, and then lifted the sword. It was heavy. Without a hint of hesitation, he then looked at Nandini and said, “Amma, I like you the most in this group, and I think you are the best person to rule, until I take up the throne.”