The best sailor in this region is Poonkuzhali, but it is also the most difficult task to convince her to take you. I would advise you to not ask her right now. Wait for an opportune moment and ask. If she refuses now, it would be difficult to convince her later.

That night, after dinner, Vandhiyathevan met Thyagavidangar, the lighthouse keeper, alone. He expressed his desire to cross over to Lanka.

“There was a time when there used to be a large number of boats here. They are all now in Sethukarai. They are helping our troops fight the war in Lanka. I have two boats, one of which my son has taken. He has gone with the two people who came yesterday. I am not sure when he will return.”

“Sir, can you tell me who the two people who came yesterday were? Your daughter mentioned that they did not look very amiable.”

“Yes. I did not like them either. I am not sure who they were. They had a ring with the Pazhuvettarayar’s insignia. I would still not have let my son go. Unfortunately, my daughter-in-law has an extreme greed for money. When she heard that the two strangers were ready to give a big bag full of money, she forced her husband to go.”

“And your son did not listen to your words? Anyway, I do not wish to interfere in your family affairs.”

“There is nothing wrong in you asking. My son has a…”

Vandhiyathevan remembered what Amudhan had said about this family, and remembered that the son was dumb.

“I now remember, sir. I remember what Amudhan told me about your son. I am sorry.”

“Oh, you are that brave man, whom Amudhan had helped. Word about you has reached all corners of the kingdom. I hear they are searching for you all over.”

“That does not bother me at all. But, please do not mistake me to be someone who is running away from these people. I am going to Lanka to deliver an important scroll.”

“I am thinking about the favour you are asking of me. One of my boats is gone. I do have one more boat, but there is no one to take you. Would you and your friend be able to take the craft to Lanka?”

“I do not think so. Neither my friend nor I know how to sail a craft. In fact, I am a little scared of the water. My friend is not coming with me to Lanka. He is here to get some herbs and return to Pazhayarai.”

“If it is only you, then there is one way. The best sailor in this region is Poonkuzhali, but it is also the most difficult task to convince her to take you. I would advise you to not ask her right now. Wait for an opportune moment and ask. If she refuses now, it would be difficult to convince her later.”

Vandhiyathevan walked towards the lighthouse and lay down in the verandah of the keeper’s house. Tiredness took its toll. He was asleep in no time.

After a few hours, he heard someone open the door and walk out. It was Poonkuzhali. Vandhiyathevan remembered what Poonkuzhali had said earlier in the day. He forced himself to wake up and followed her. He thought it might be good to know more about her. It might help him in convincing her the next day, to take him to Lanka.

She started walking faster. It took a lot of effort to keep up with her. He followed her across the bush forest. They went up and down the dunes of seashore sand. It became darker as they went further away from the lighthouse. He almost had to run to keep up with her. And then she vanished.

He looked around and strained to see where she was. The trees cast gloomy shadows all around. Fireflies flitted around. And then suddenly he saw a figure sitting on top of a tree. And almost at the same time, he heard a sad melancholy song. He slowly walked towards the figure. He noticed that he was climbing a small hillock on top of which was the tree, on which she was sitting. He reached the top and stood mesmerised at the view from the top. He could not see the lighthouse. He could see the silver sands. He could see the waves lapping on the beach.

“Vandhiyatheva, so you have come! I saw you sleeping like Kumbakarnan outside the house.”

“I woke up when I heard the door open. It was quite a task to follow you to this place.”

“You only asked me to come here, if I wanted to see your… lovers.”

Poonkuzhali stopped in mid-step and turned around. She saw that he was stuck in the quicksand. She looked around and saw an abandoned craft. To his amazement, she jumped on to it, and paddled deftly through the wet sand and crossed the quicksand pit. She jumped on to firm land on the other side. She got down on all fours, firmly gripped Vandhiyathevan’s hand, and slowly pulled him out. 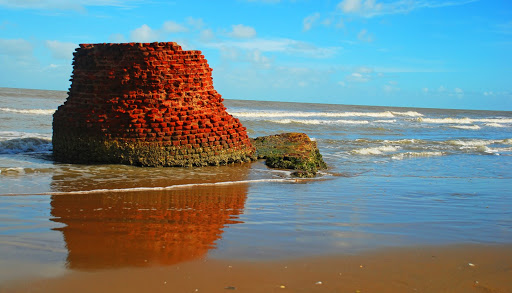 Vandhiyathevan chased Poonkuzhali over the mounds of fresh white sands of Kodikkarai, through the dense shrubbery. She vanished for a moment and then he saw her again. He realised that she had the speed of a deer.

“Why am I chasing this girl?” he thought to himself.

His mind quickly gave a reason for this act as well. As they had neared Kodikkarai, Vandhiyathevan had been reminded of Poonkuzhali, whom Amudhan had so beautifully described. This girl, whom he had seen on the temple wall, seemed to resemble her. Vandhiyathevan had thought that befriending this girl would help him in manyfold ways. He could take her help to reach the lighthouse. They had been hopelessly lost in the bush forests nearby, when they had run into the Kuzhagar temple and seen Poonkuzhali on the wall.

But, catching her was proving to be a challenging task. He then chanced to see an opening in the shrubbery and saw the endless expanse of the ocean through it. He stood for a minute to take in the beautiful sight. He saw the lighthouse also in the distance, with the bright fire on top of it. He decided to pursue her through this open space, and thought it would be easier to catch her. He saw her run towards the ocean. He started running towards her. He noticed that she started running towards the forest again.

By now, Vandhiyathevan was getting very tired and was beginning to run out of breath. She was just a few steps away. As he made the last lunge to catch her, he heard her scream a word of caution. He stopped abruptly. Slowly he began to realise what was happening. His feet were sinking. He was down to his ankles and sinking slowly. He had heard about these quicksand pits. These pits were capable of swallowing whole animals – even large ones like elephants. He was down to his calf muscles. He began to panic.

“Ayyo! Please help. Can someone please help me? I do not want to die like this.”

Poonkuzhali stopped in mid-step and turned around. She saw that he was stuck in the quicksand. She looked around and saw an abandoned craft. To his amazement, she jumped on to it, and paddled deftly through the wet sand and crossed the quicksand pit. She jumped on to firm land on the other side. She got down on all fours, firmly gripped Vandhiyathevan’s hand, and slowly pulled him out.

He realised the strength in her arms. They seemed even stronger than the iron hands of the Chinna Pazhuvettarayar, who had gripped him earlier.

Once on firm land, he stood up, and to her surprise, he started laughing loudly. His knees were still shivering a bit.

“Ha ha! So, you think you have rescued me from the quicksand? Do you think I could not have escaped on my own?”

“Hmm. Then why were you screaming out in panic?” “Oh! That was just to stop you from running away.”

“Ok, then. Let me push you back into the pit. And you can come out using your own prowess.”

“I am not afraid of my life. I am afraid of this wet sand. Look, I am dirty up to my knees already. I do not want to get dirtier.”

She laughed softly and said, “Then, you should go and wash yourself in the ocean.”

“I would appreciate it if you could help by showing me the way.”

She guided him to the water, by navigating around the quicksand.

“Why did you run away like that, when you saw me? Did you think I was a ghost?” “No, I did not think you were a ghost, but an owl. Your face resembles that of an owl.” And she laughed heartily.

“To your monkey face, it seems like my face is an owl face,” he murmured.

“Oh, nothing. I was asking why did you run away like that on seeing me.”

“Why did you come chasing after me?”

“Can’t you see the lighthouse now? It is visible from so far away.”

“Not from within the jungle. You still have not answered my question.”

“Even Sendhan Amudhan from Thanjavur?”

“What do you know about him?”

“I know that he is your lover.”

She laughed a vicious laugh. “Did he say that to you? Thanjavur is so far away. That is why he can get away with saying something like that. If he was here, I would have thrown him into that same quicksand pit that you fell in. What else did he tell you?”

“He said that you were his cousin, and that you looked so beautiful that even apsaras from heaven are no match for you. He also said that you sing so beautifully that the ocean waves stop making noise so that they can listen to you.”

They reached the ocean together.