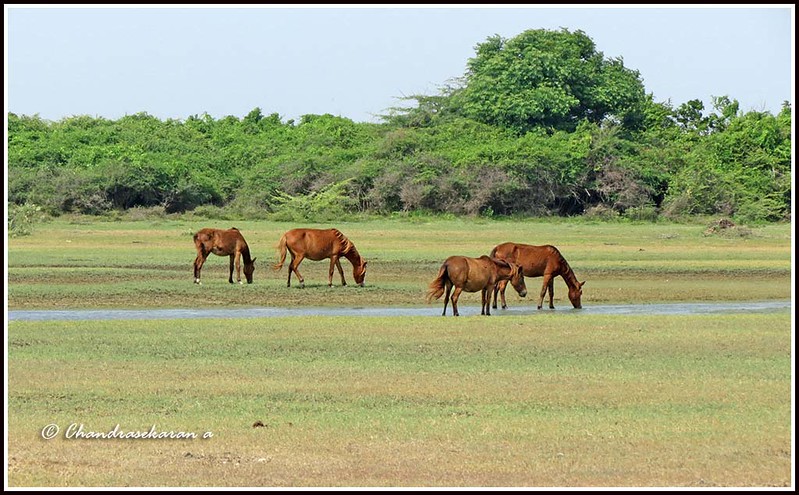 The sun was setting in the coastal town of Kodikkarai. The seagulls were returning back to land. The sun was almost touching the horizon. Beyond a narrow strip of white sand beach stretched an endless forest of dry shrubs and short trees. A small boat was close to banking on to the shore. The small craft had a young lady manning it. She does remind us of the beautiful description that Sendhan Amudhan had given of his cousin, Poonkuzhali. Yes, it was indeed her. Her dark long tresses of hair dropped down to her shoulders. She was leaning back comfortably on her craft and singing a melancholy song. The ocean, the sunset, the sea winds – everything seemed to be hushing, to hear her music. On hearing the song, anyone’s heart would break.

Poonkuzhali rowed the last few strokes with her paddle and the craft struck ground. She lithely jumped out of the craft and walked up to the shore pulling the boat behind her. She banked her boat against a few catamarans on the beach, and took one final sweeping glance around the beach.

She looked at the lighthouse. The fire on top, had just been stoked and was burning bright. This fire would burn bright through the night cautioning nearby ships and boats of the shallow shore nearby. Only small crafts could harbour in this area. Larger ships could easily get stuck in the shallow sand bars. Near the lighthouse was the temple gopuram.  This was the temple of Kodikkarai Kuzhagar.

Around 200 years ago, the great poet-saint Sundarar had sung Devaram songs at this temple –

“There are so many temple towns, where your devotees come in hundreds and thousands to worship you. Why did you choose this desolate sea-side forest at the corner of Kodikkarai to come and reside? But so be it, this humble devotee Sundarar got to see you at this beautiful place.”

Two hundred years since, the temple still remained desolate. The only difference was the new lighthouse built by the Chozha King Paranthakan I. A small settlement was also created around the lighthouse for the keeper. The temple priest had also come and settled here.

At this moment, Poonkuzhali heard the temple bells ring. She decided to go to the temple and hear the priest sing Devaram songs and also perhaps have some of the prasadam that he would have offered to the Lord. She started running towards the steps of the temple, when she noticed the herd of deer. The herd consisted of three large deer and a small fawn.

Poonkuzhali changed her mind in an instant and started running behind them. The deer was much faster than her, but she kept pace. And then suddenly, the three older deer took a large leap. Her instincts told her that there must be a quicksand pit and she stumbled to a halt. The fawn also attempted to make the leap, and almost made it, but not quite. While her front two legs were out on solid ground, the fawn’s back legs were in the quagmire. She dared not move. Her mother looked on in fear from aside.

Poonkuzhali looked around and gauged the extent of the quicksand, and slowly made it around the pit. She knelt on all fours, gently reached out to the fawn and pulled it swiftly out of the quicksand. The young fawn shivered in relief for a little while, before jumping towards her mother. The mother and fawn gave Poonkuzhali a quick glance and raced away.

She smiled to herself, “These animals are thankless. However, they are still better than the human species.”

Poonkuzhali started walking back towards the Kuzhagar temple. She had to walk through the thick bush forest. The ground was mostly sea sand. For someone who came here for the first time, this could be a complicated maze. In whichever direction you looked, the scenery was exactly the same. One could easily get lost.

Poonkuzhali, however, found her way expertly to the temple. The priest welcomed her with a smile, for visitors to this temple were very rare. He went inside and brought out a container with prasadam for her.

“Poonkuzhali, could you please wait for a little while? Let me lock the temple doors and come. We can go back home together.”

It was quite a difficult task to get to the lighthouse settlement from the temple after dark. And the priest knew that it would be much easier with Poonkuzhali to guide him.

Poonkuzhali nodded her acceptance and swung herself onto the temple wall, with the help of a low-hanging tree branch. She rested lightly against a sculpture of Nandi, and began eating the prasadam. There was the sound of horses. For some reason, this sound brought a sense of trepidation within her – an unknown fear.

“Who could it be? Why should I care? These days, there are so many new people coming and going through these parts. They claim they are coming on State business. Just yesterday two people came. They paid a handsome amount of money to my brother for taking them across to Eezhanaadu. But what good is money? What can money help with, in this desolate land? But for some reason, my brother and his wife seem to be enamoured by it. What will they do by accumulating so much of money?” thought Poonkuzhali, looking in the direction of the sound.

She heard the sound of horses come nearer. She saw them at last. There were two horses. One of the horses had a handsome young warrior riding it. But, compared to the handsome person she held in her heart, this rider had a flat face like an owl. This flat-faced warrior was none other than our old friend, Vallavarayan Vandhiyathevan. The other rider was the son of the Vaidhiyar (doctor) from the Pazhayarai hospital. Both of them were tired after their long journey. The horses looked weary as well.

Vandhiyathevan’s gaze fell on Poonkuzhali and he noticed that she was looking at him as well. Our young warrior broke into a wide smile. She noticed that he was staring at her too. A sudden pang of shyness swept over her. She jumped on to the white sand near the wall and started running. For reasons unexplainable, Vandhiyathevan jumped off his horse and started running behind her.