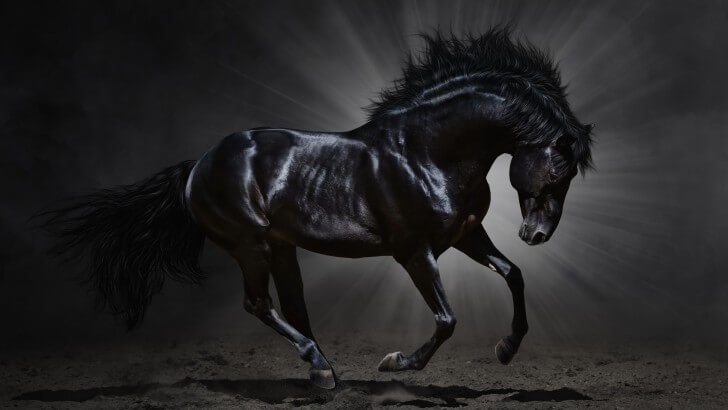 Vandhiyathevan rode for a few minutes, but could not spot the palanquin. It was a dark night. The clouds had spread too. He suddenly heard the sound of a horse. He slowed down. He noticed that the horse was stationary. He looked around to see where he could hide. He noticed a dilapidated mandapam and its half-crumbled wall. He quickly hid behind it.

“Who is there?” Vandhiyathevan recognised that voice.

“It is me, Maharaja,” replied another man with a torch. In the light of the torch, Vandhiyathevan recognised the person on the horse. It was none other than Madhuranthaka Thevar. When the man with the torch came close to the horse, it buckled and reared on its two legs and started running. In the light of the torch, Vandhiyathevan also recognised that it was the bank of a canal. The horse tried jumping across the canal. The man with the torch ran behind the animal, tripped and fell into the canal and the torch went out.

It started drizzling heavily. He could hear the sound of a desperate Madhuranthaka Thevar. Vandhiyathevan knew that he was not that brave a soul, and was not a trained rider either. He wondered what the horse had done to him.

He was momentarily confused. Should he continue searching for Vanathi? Or help Madhuranthaka Thevar? He could not spot Vanathi anywhere. He decided to save Madhuranthaka Thevar and proceeded towards the canal. He heard sounds on the other side of the canal. He crossed the canal and galloped slowly between the fields. It started raining heavily. He wondered why Madhuranthakan was here riding alone. Would this have anything to do with Vanathi’s disappearance?

He cursed himself for once again venturing into business that was not his. He wondered if he should just turn back and take shelter in the mandapam. There was a flash of lightning and he saw the horse a little further ahead. He did not see a rider on the horse. He decided to search a bit for Madhuranthakan. He called out several times. There was no response. He shivered, soaking wet in the rain. He cursed himself more as he turned around and went back the same way until he reached the mandapam. He searched for a stable roof under which he could spend the night.

And he heard a child cry out – “Amma….” Was he dreaming? Was it a ghost? The child called out again.

Taken aback momentarily, he said, “Who is this?”

“Who are you? And where is my mother?”

“Your mother has gone out to get milk for you. Come outside. I want to see you.”

“It is raining and I do not wish to come outside.”

“If you do not come outside, I will come inside.”

“If you come inside, I have a sharp sword with me, and I will kill you with it.”

“Who are you, child? Do not worry. I will not harm you. Do not be afraid.”

“Fear? I do not know fear,” said the child, gingerly stepping out. The rain had stopped.

The child appeared around six years old, had a silk cloth around its waist, and a bejewelled necklace on his neck.

Vandhiyathevan realised that the child was of a noble family, and wondered who was the mother, who had left this child in this dark, rainy night in this mandapam.

“Oho. You came on a horse. They said they would be sending a palanquin?”

Vandhiyathevan was still in a daze. Who was this young child? Where was his mother? Who said they would send a palanquin? He was amazed at how fearless the boy was.

“Boy, where is your mother?”

“I don’t know. I saw a runaway horse. I chased it. I ran behind the horse without telling my mother. Is this the same horse?”

“No. This is my horse. But, how did you end up here?” asked Vandhiyathevan.

“I could not catch the horse. And I could not find my mother. The rain increased, so I took shelter in this mandapam.”

“Are you not afraid?”

“Not even of tigers?”

“No. Only my mother is afraid of tigers. I am a fish and I will swallow a tiger.”

“Adei. How will a fish swallow a tiger?”

“I am not a small fish. I am a whale. I will swallow anything in my sight – tigers, lions, elephants – anything.”

Vandhiyathevan wondered who had taught the boy all this.

He heard a loud sound and turned around. He saw a crowd approaching them with torches. There was a palanquin in the middle. He could see a lady in the crowd as well. They were running towards them.

“Can I ride on your horse?”

“No. I have some important work. I need to go to Kanchi.”

The crowd had come too close. It would induce too much suspicion if he tried to flee. He also wanted to know who this young boy was. He ducked into the dark shadows of a nearby wall.

The lady at the front of the crowd ran towards the child and hugged him tight.

The man behind her was Ravidasan.

“Chakravarthy, you scared all of us,” said he.

“You said you would get me a horse this time. Why did you bring the palanquin again?”

Soman Sambavan, Idumbankari, and the devaralan, stepped forward. Soman spoke, “Chakravarthy, we will get you as many horses as you want. But this time, please come back in the palanquin.”

“No. I will not come in the palanquin. I will come only on that horse,” said the child, pointing at Vandhiyathevan’s horse near the wall.

Torches were turned in the direction that the child pointed to, and everyone noticed the horse, and Vandhiyathevan standing near it.

Ravidasan’s face turned a crimson red in anger and surprise. “You scoundrel. How did you land up here?”

Vandhiyathevan shot back, “Dei. You are a ghost. How did you come here from Kodikkarai?”

Ravidasan laughed with his characteristic eerie laugh. “You still believe I am a ghost?”

“Some people become ghosts after they are dead. You are a ghost even when you are alive.”

“Don’t fight with this man. I like him. He gave me company in the darkness. Let him come with us.”

“Chakravarthy, sure. We will bring him with us. Please alight the palanquin now.”

Ravidasan turned to Vandhiyathevan, “You need to come with us now. We cannot leave you here. I had told you a lot of our secrets even earlier in the ship. Now you know even more.”

“What if I refuse to come with you?”

“That is not possible. I know you are a brave warrior, but this time, we have twenty people with us. You cannot escape us.”

“Where are you planning to take me?”

“Oho. That is what I thought as well. And where is she now?”

“By this time, she would have reached Thirupurambiyam.”

“Ah. Great. I was also heading that way, and was planning to ask someone for directions. Luckily, you came along. Let us go.”

By this time, the child had gotten into the palanquin. The crowd started moving.

A flood of thoughts raced through Vandhiyathevan’s mind. What happened to Vanathi? He had no idea. What happened to Madhuranthakan? Again, he was clueless. What will happen to him, by the end of the night? That seemed to be a dead end too.

This seemed to be a coup more complex than what he had seen being planned in the Kadambur palace. He would know more details before the end of the night. Would he even be able to escape alive from this situation? He was sure that they would try to coax him into joining them. And if he refused, they would take his life.

He figured that if he bought some time, he would be able to think of a plan to escape. The child’s voice telling him that his main enemy was in Kanchi, haunted him. Who is this child? Why are all of these people calling him Chakravarthy? Who is the main enemy in Kanchi?

He went with the crowd. They crossed forests, shrubland, and canal banks. Finally, they crossed the Manni river into Thirupurambiyam. They entered the forestland surrounding the pallipadai.