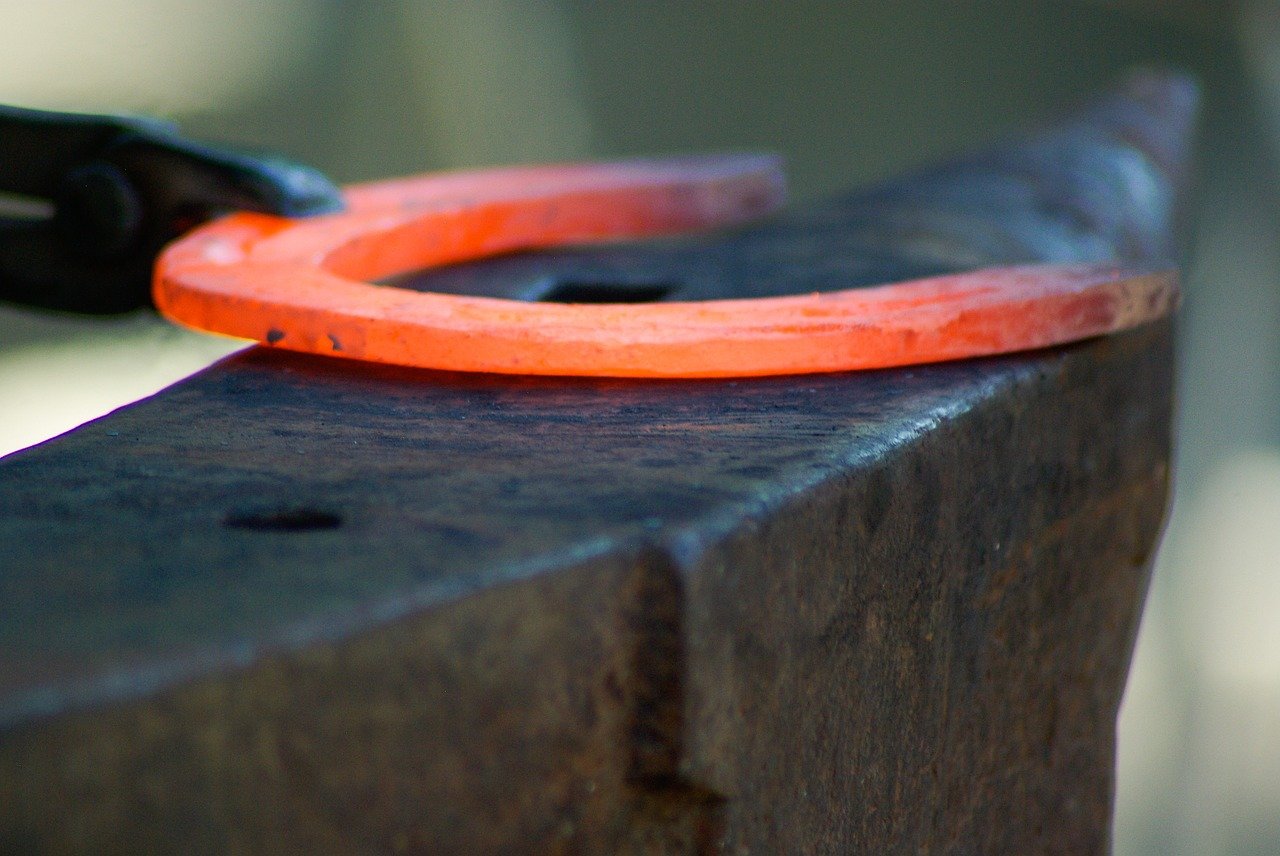 The blacksmith was deep into work, and Vandhiyathevan had to attract his attention by clearing his throat a couple of times.

“Appane, what do you want? Do you want a sword or a spear? But what good is a sword or spear these days?”

“Sir, what are you saying? You have a beautiful sword in your hands, and you are talking like this.”

“This is a special job. To refurbish an old sword. Leave it. Anyway, during the days of the Pandian war, this shop used to be full of new swords and spears. Even during the beginning of the Lankan war, there was demand. Now there is nothing. People come here only for refurbishing and selling. What do you want?”

“I want to make horseshoes for my horse. I have driven the poor animal over mountains and forests, and I still have a long way to go.”

“I can definitely do that for you. But first, I will have to finish this work that I have taken up. If you can wait, then I will take up your job next.”

“This sword seems to be a beautiful one. Looks royal to me. Whose is this?”

“There is a river named Harischandra River nearby. I take a bath in the river regularly. And I have taken an oath not to tell lies.”

“Who is asking you to tell lies?”

“If you do not ask me about this sword, then I would not need to lie to you.”

“Oho, then you carry on with your work. I will wait.”

He looked at the royal sword for a long time, and noticed the symbol of a fish near the handle of the sword. The blacksmith was heating up that part of the metal, and hammering the molten steel. He realised that the intention was to remove the fish emblem from the sword. He thought hard about the significance of the fish emblem, and why it was being removed.

And before he could realise it, he slumped into a deep slumber. It had been several days since he last slept, and he was fatigued. Nidra-devi took over.

He slipped into a terrible dream. He dreamt that someone came for the sword and took it from the blacksmith – “What do you want as a fee for fixing this sword?”

The blacksmith responded – “Nothing sir. It is my way of paying my respect to the Pazhuvoor Rani”.

“What about this young man, sleeping here…”

The dream continued. He dreamt that Lord Yama’s soldiers came to take him to hell. When they reached hell, Chitragupta, Yama’s accountant, referred to his scrolls, and proclaimed that Vandhiyathevan had uttered a significant number of lies in his life.

Yama gave the sentence to push him into the burning embers of hell.

“Ayya! I had said all the lies, in the service of the royal family. If I take on a job, I have to finish it.”

As they were getting ready to push Vandhiyathevan into the pots of burning embers, he saw Princess Kundavai there. And she said, “Please do not do anything to him. He did what I ordered him to. You can push me into the embers instead.”

Nandini Devi appeared out of nowhere and said, “Push them both into the embers.”

At that moment, Vandhiyathevan woke up with a start. He felt very glad that it was all a dream. He decided never to tell a lie again.

“Sir, have I been sleeping for too long?”

“Appane, you have been sleeping for a very long time. You seem to be from Kumbakarnan’s lineage. You are sleeping so deeply during the day time. I wonder how you will sleep at night. If you sleep like this, someone will surely even steal your horse.”

He got up with a start and ran to the front of the shop. He could not find his horse. Before he could react, the blacksmith’s son came running and pointed him to the back of the shop, and said he had tied the horse there. The horse was being fed some grass and it neighed gleefully on seeing Vandhiyathevan.

“Why did you bring the horse here?”

“Appa asked me to bring it here. Some time back, the Periya Pazhuvettarayar and his retinue passed by. If they had seen your horse, they would have definitely taken it with them.”

Vandhiyathevan remembered his early encounter with the Pazhuvettarayar and his boisterous retinue, at Thirunarayanapuram. He felt ashamed that he had been sleeping so long. He felt ashamed at doubting and yelling at the blacksmith and his son. He apologised.

The blacksmith measured the horse’s hooves and started bending some iron pieces to make horseshoes.

“Ayya, thanks for saving my horse. How long would it have been since the retinue went past?”

“Sir, could you not have started my work then.”

“How could I, son, after hearing the news that they told me! Where are you coming from?”

“I am coming from Lanka sir.”

“Did you see the Prince, when you were there, in Lanka?”

Vandhiyathevan decided to uphold his recent vow of only speaking the truth. “Yes. I saw him.”

“When did you last see him?

The blacksmith angrily looked at him, and said, “Next, you would say that you also know where he is now?”

“Yes. He is now at the Nagapattinam Choodamani Viharam.”

The blacksmith now lost his temper. “Appane, I have seen liars and tricksters, but none as bad as you. When did you leave Lanka?”

“About four days ago.”

“Oho! That is why you do not know the news. News that the Prince has drowned in the ocean, on his way to the Indian mainland.”

Vandhiyathevan pretended to be shocked on hearing the news.

“They are saying that the Pazhuvettarayars might have conspired to drown the Prince. The town folks are all distraught and in sorrow. The entire Chozhanaadu is going to wail in despair. When the Emperor hears this, I do not know what will happen to him. For a while, we have been seeing the Dhoomakethu on the horizon. That forebodes bad times. I do not know what all is going to happen.”

Vandhiyathevan thought for a bit. While he should stick to speaking only the truth, he thought it better to not talk about the Prince to anyone for the near future. He should first consult the Princess and then act as per her suggestion.

“Thambi, what are you thinking?”

“I was thanking God, for saving me from the squall while coming from Lanka to here.”

“There is nothing called God anymore. If there were, would the Pazhuvettarayars still be reigning their boisterous rule? Would the Prince have drowned in the sea?”

“Sir, you should be careful about talking such things about people in power.”

“Ayyo. What else was I saying?” asked an ashamed Vandhiyathevan.

“You were talking about how you tried to convince the Prince to come with you to Pazhayarai, but the Prince refused, and wanted to get captured by the Pazhuvettarayar’s men. You were also saying unmentionable things about the Princess. Appane, you should be the one to be careful.”

Vandhiyathevan hung his head down in shame.

“Sir, I need to get to Pazhayarai as quickly as possible, and without encountering the Pazhuvettarayar retinue on the way. What is the best route?”

The blacksmith responded, “They are going by the main Thanjavur highway. You can reach Pazhayarai by going along the banks of the Mullaiyaaru.”

Soon, the horseshoes were fabricated, and fitted on Vandhiyathevan’s horse. When Vandhiyathevan wanted to pay for the services of the blacksmith, the old man refused to accept it.

Vandhiyathevan thanked the old man, and set off on his journey. The sun had almost set. And in just a little while, darkness enveloped him completely. Thankfully, he reached the banks of the Mullaiyaaru. Now, all he needed to do was to follow the river. There was no need to ask for any more directions. The bank was relatively even and he only needed to navigate short shrubs.

He hummed a song as he trotted along the river bank. He was sure that there was nobody in these parts. But he was wrong. He heard a maniacal laughter from behind one of the Punnai trees. It was Devaralan – “Hahaha. Your song is superb, young man.”