“If there is a big calamity that befalls the Chozha kingdom, it would be because of only two ladies.”

Kundavai exclaimed, “One lady is me; who is the other one?” 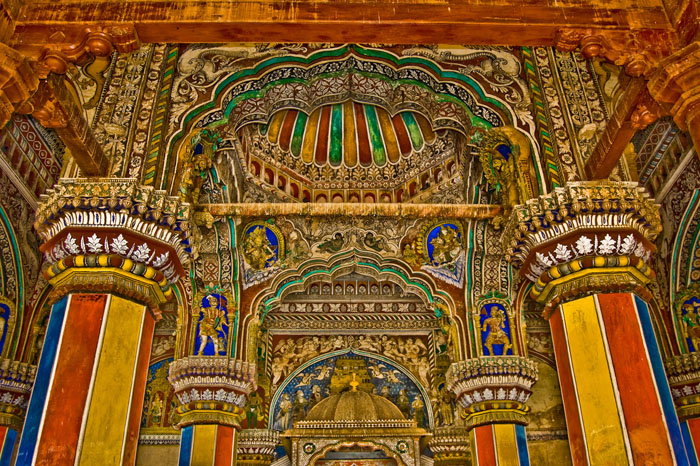 Princess Kundavai’s life had taken a drastic turn. It used to be a fantasy land, where she did not know the meaning of sorrow or sadness. Life was filled with close friends and hand-maidens, who took care of each and every whim of the Princess. In recent times, she was slowly getting exposed to current affairs. Astrologers were predicting that something bad was going to happen to the Chozha kingdom. She had gotten to know about a plot to overthrow her brother from being heir-apparent. Deadly rumours roamed the streets of the city.

However, Kundavai was one who possessed a very strong will and she was confident that she could solve all this with her diligence and planned actions. She did possess adequate mental acuity to manage all this. She also noticed that she was being drawn towards this charismatic man – Vandhiyathevan. Why was she getting drawn towards him? Why had she been so badly affected when Nandini mentioned that he might be dead?

But this was no time for these thoughts. Things had to be done. She had sent word that she would be meeting the Chinna Pazhuvettarayar in the afternoon.

“This is an excellent collection. It looks like the Pazhuvettarayars have rendered much service to the royal family of this kingdom.”

“It has been our blessing to have done so.”

“But could you not wait until my father dies, to start plotting your activities to capture the throne for yourself? What is the big hurry?”

The Chinna Pazhuvettarayar was shocked. His forehead was covered with beads of perspiration. His hands were shaking. He fumbled for words.

“Oh, Princess. I am deeply hurt by listening to you talk of me like this.”

“If so, please tell me, if I have committed any mistake by sending men to gather herbs to cure my ailing father’s health?”

“Of course, it is not your mistake to have done such a noble thing.”

“Then, why did you capture the Pazhayarai Vaidhiyar’s son and bring him back to the city in chains like a common criminal? You did know that it was I, who had sent him.”

“Perhaps, oh Princess, you do not know yet, that he is a spy.”

“He can never be a spy. How can the son of a famous Vaidhiyar be a spy?”

“Well, he himself admitted that he was one.”

It was Kundavai’s turn to be shocked now.

“How could that be? What did he admit?”

“He admitted that the person traveling with him was a spy. He admitted that his companion was not really searching for any herbs but was in reality, taking a scroll to someone in Lanka.”

“This Vaidhiyar’s son is a fool. Were you not aware that the person who accompanied this fool was also sent by me?”

“Yes, Princess. I am aware. I am also aware that the companion, whose name is Vandhiyathevan, has tricked you as well. He is really a spy.”

“I know that he delivered these scrolls. Spies have their own ways of deceiving common people. If he is not a spy, why did he have to go to the Kudandhai Josiyar and ask him about the future of the Emperor?”

“Well, I had also asked about the future to the astrologer. What is wrong with that?” shot back the Princess.

“The Emperor’s daughter asking this question is different. A common man asking these questions invokes suspicion.”

“That is just your hunch. Do you have any other proof?”

“If it was not the Periya Pazhuvettarayar who gave him the ring, who gave it to him?”

“We are still investigating about that.”

“Your men could not even find that till now?”

The Pazhuvettarayar was clearly getting irritated. “I said, we are still investigating. We have just now caught one of the spies. We will interrogate him and find out.”

“And what if he does not tell you the truth?”

“We have ways to make him tell the truth. We have the famed Thanjavur underground dungeons. The other spy had known about this. And that is why he escaped from the fort. On his way, you might have heard, he also tried to kill Sambuvarayar’s son.”

“Do you have proof for that?”

“It is just Kandanmaran’s word that we believe.”

“Hah. Just his words. I am telling you now, Kandanmaran was not stabbed by Vandhiyathevan.”

“What proof do you have for this assertion of yours, Princess?”

“I can find out from a person’s face if he is lying or is a deceitful person.”

“Why do you keep referring to him as a spy?”

“Oho. He has escaped to Lanka? Your guards have still not been able to catch him.”

There was visible relief and happiness in Kundavai’s voice.

“Hmm. Yes. This dangerous spy is a tricky one to catch. These idiotic soldiers of mine let him escape and came back with this Vaidhiyar’s son.”

“I do not care about the spy. The Vaidhiyar’s son was sent by me. Release him immediately. He is innocent.”

“This fellow might not be the spy. But he has been an accomplice to the spy. He has been fooling my guards with all kinds of fantasy stories. He has helped the spy sail away.”

“I do not care. Release him immediately.”

“I am sorry, Princess. I am not willing to do that. In the interest of the nation’s security, I cannot do that. There are coups and traitors all over the kingdom. I am hearing rumours that the supporters of Veera Pandiyan are regrouping. These supporters have sworn to vanquish the entire Chozha royal family.”

“Let there be room for the real conspirators. Release this innocent man.”

“I am not willing to do that myself, Princess.” The Chinna Pazhuvettarayar was clearly very irritated. He fished for a large key bunch from his tunic and handed it over to the Princess.

“Here are the keys to the underground dungeons. You can go and release the man yourself. You can release any one else you deem to, as well. The repercussions of this act are solely yours.”

Kundavai suppressed the boiling anger within herself. She reached out and took the keys. “Ok. I will do it myself. And I will take responsibility for my actions.”

“If there is a big calamity that befalls the Chozha kingdom, it would be because of only two ladies.”

Kundavai exclaimed, “One lady is me; who is the other one?”

“I hope you realise what would happen to you, if your elder brother hears this statement of yours. He will exile you from this kingdom.”

“That would be perfect. I am waiting for that day.”