These scenes seemed to be exactly like what Sambandhar and Sundarar had described in their paasurams. The only difference now was that, in place of the devotees thronging to the Thiruketheeswaram temple, there were battalions of armed soldiers roaming around the city. It had been a cantonment city for the last hundred years. 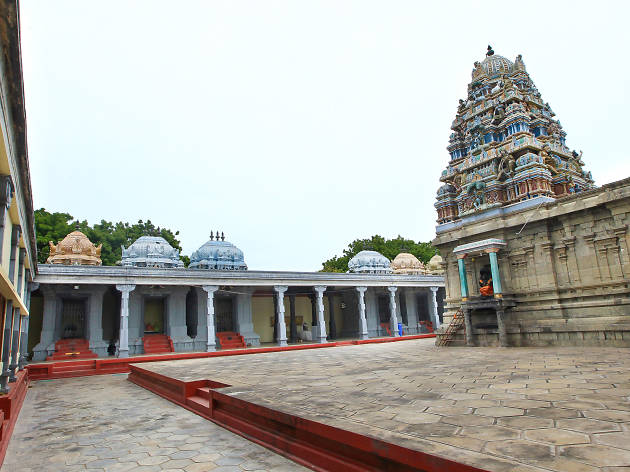 Though it seems like a short time, we have lingered in Thanjavur for a long time now. We have forgotten about our young hero – Vandhiyathevan.

Vandhiyathevan had walked along the coast from where Poonkuzhali had dropped him off and reached the grand city of Maathottam (now called as Thiruketheeswaram). The entrance to the city was filled with fruit trees of every kind. The port of this bustling city was filled with boats and ships of all kinds and sizes. Goods were being loaded and unloaded from these ships.

These scenes seemed to be exactly like what Sambandhar and Sundarar had described in their paasurams. The only difference now was that, in place of the devotees thronging to the Thiruketheesaram temple, there were battalions of armed soldiers roaming around the city. It had been a cantonment city for the last hundred years. The city had been under the control of the Lankan kings for a while and the Pandiya kings during other times. More recently, since Paranthaka Chozhan, it had mostly been a Chozha province.

It was at the fort gates of this cantonment town that Vandhiyathevan stood today, looking at the tall fort walls. He had tried getting in through the gates, but entry had been refused. He had tried his earlier method of forcing entry into the fort, like what he did at Kadambur. He was promptly captured and taken to the Fort Commander.

“I have an important message for Prince Arulmozhi from Thanjavur. I cannot discuss this any further with anyone other than the Commander of the Lankan forces.”

They searched him and found a scroll addressed to the Prince and the ring with the palm tree insignia. The commander of the Lankan forces, General Kodumbalur Boodhi Vikrama Kesari, was informed about Vandhiyathevan. The General was leaving for Rameswaram, along with the Chief Minister, Aniruddha Brahmaraayar. The General gave orders to imprison Vandhiyathevan, until he got back from Rameswaram.

Surprisingly, Vandhiyathevan was very happy about this decision. He was tired from the long journey. Imprisonment was the best way to rest, he thought. He was taken to a dilapidated house in the city, and put under guard.

He spent the first day sleeping and rejuvenating his body. The second day, an interesting thing happened. He started hearing an agitated man shouting in the room next to his.

“Do not come near me. I will kill you. I will send you straight to heaven. What do you think of yourself? You do not know who I am.”

Vandhiyathevan heard only one voice though. There was no one replying to this. He heard this shouting for several hours that day. Towards evening, the shouting increased, and suddenly something dropped into his room through the low wall separating the two rooms.

Vandhiyathevan was petrified for a moment, but as he regained his composure and saw what had fallen, he started laughing heartily. It was a cat. The man in the next room had been threatening a cat all this while. One other thing that was puzzling Vandhiyathevan was that the voice seemed very familiar. He could not remember when or where he had heard this voice, but he had definitely heard this voice before.

He tried to sleep now, but the cat would just not let him sleep. After a little while, he got very irritated at the cat and threw it back over the low wall. There was commotion on the other side of the wall again, with the voice threatening to kill the cat again.

“Who threw the cat back here? Is there someone on the other side?” asked the voice from the other room.

Vandhiyathevan kept quiet. He pretended to sleep, but had his hand on his sword. He waited. He saw two hands trying to climb the low wall and then a face slowly appeared.

Vandhiyathevan recognised the face now, and realised why the voice was so familiar. It was Alwarkadiyaan Nambi.

He got up and sat down. “Veera Vaishnavare, welcome! Welcome to the holy Shiva-sthalam, Thirukedeeswaram.”

“Oho, it is you, thambi. I thought it should have been you. Who else would be sitting so smugly without making a sound?”