Two of the guards pushed one of the tiger cages to a side, using a system of pulleys and wheels. They then pulled up a trap door closed with a heavy stone slab. Steps led down to the dungeon. 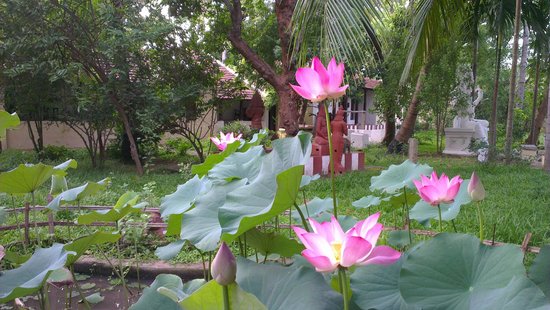 The royal mint of the Chozha kingdom was located in one corner of the Thanjavur fort. It was as heavily guarded as the outer gates of the fort. It was around sunset when Kundavai and Vanathi arrived at the mint. When their chariot came to a halt, the soldiers and the people around cheered and hailed the Princess of the kingdom. It was closing time, and the goldsmiths who had been minting coins through the day were leaving the mint.

The goldsmiths were being frisked and checked before they left for their homes. The Chief Soldier gave the royal ladies a tour of the mint. They saw the process of how beautiful gold ornaments and gold ingots were melted and cast into coin-shaped forms. The coins had the tiger emblem on one side and a ship emblem on the other.

“Akka, what is the advantage of converting the gold into coins?”

“You are indeed a very innocent and naïve girl. If we convert gold into coins, it will facilitate trade between neighbouring countries. It is also very easy to measure and count. It will also enable our subjects to pay taxes and other levies more easily and accurately.”

Kundavai lowered her voice and said, “There is also one unfortunate thing that this conversion facilitates. These people whom we keep hearing about, who are plotting a coup against my father – they can easily sway and buy over people and resources, to get their ulterior work done.”

The Chief Guard heard this last bit of information faintly.

“Princess, you are right. There are many such rumours floating around. The security in the mint has hence been increased significantly in recent times. The number of people who come and go to the underground dungeons below this mint has also increased.”

“I understand people coming into the dungeons have increased. But leaving it too?”

“Yes, Princess. Just yesterday, there was a prisoner who was brought in. A little while ago, they took him away again.”

The Princess and Vanathi walked through the mint towards the back gate. They reached a tall wall on which there was a small gate. They opened the gate and stepped inside. It was dark inside and the ceiling was low.

Kundavai grabbed Vanathi by her arm and said, “Vanathi, I hope you are not afraid. Please do not faint and fall here.”

“Akka, why should I be afraid of tigers? They are after all the symbol of our kingdom, and hence our protectors.”

“Sometimes protectors join forces with our enemies. We should be careful.”

“Akka, what do they feed these tigers?”

“Prisoners who try escaping the underground dungeon are the food for these beasts.”

“Vanathi, such is the nature of running a kingdom. One has to do such things.”

“You should have been there when I was speaking to the Chinna Pazhuvettarayar. It almost seemed like he would imprison me in this prison.”

“Akka, I don’t think anyone would ever dare do such a thing.”

“Right now, I am worried only about the Vaidhiyar’s son. He did seem to be an innocent boy.” The tigers were growling incessantly.

“Guard, please show us to the entrance of the underground dungeon.”

Two of the guards pushed one of the tiger cages to a side, using a system of pulleys and wheels. They then pulled up a trap door closed with a heavy stone slab. Steps led down to the dungeon.

The Princess, Vanathi, and two guards descended one by one. The darkness intensified. The light of the torches showed the way down the narrow passageway. They moved slowly in a single file. The silence was broken intermittently by the gut-wrenching cries of prisoners who were kept in isolation.

“Akka, why are all these prisoners kept here? Are they prisoners tried by any court of law?”

By this time, the beautiful music was getting closer. When they reached the cell from where the music was coming, the Princess could see that there was a young man inside the cell, sitting in peace, singing his beautiful song.

Yes, the reader is familiar with this young man. It was Sendhan Amudhan, indeed.

The young man bowed to the Princess.

“You seem to be in good spirits, young man.”

“The omnipotent God is everywhere – including here. Why should I not be in good spirits?”

“You seem to be a gnani. What were you doing before you came here?”

“I am not a gnani, Princess. I used to make garlands and worship the Lord. Here I am singing couplets and worshipping the Lord.”

“Is this the only song you know, or do you know other songs?”

“I know a few more, but ever since I came here, I have been singing just this same song. On my way here, I passed through the mint where there were heaps of gold – which reminded me of the beautiful golden skin (Ponnaar Meni) of Lord Shiva.”

“Do you have any relatives?”

“Only my mother. Her name is Vani Ammai. She lives near the thamarai kolam (lotus pond) outside the Thanjavur fort.”

“I will let her know that you are fine and in good spirits down here.”

“That would not be of any use, Princess. Neither can she hear what you say, nor can she reply back. She is both deaf and dumb.”

“Oho. Then your name must be Sendhan Amudhan.”

“And what is the crime for which you have been kept here?”

“Until yesterday, even I did not know. Just today I heard that I have been kept here for the crime of helping a spy.”

“Who was the spy you helped?”

“I met him outside the fort gates one fine day. He was looking for a place to stay. I invited him home. I did not know that he was a spy then. He said his name was Vallavarayan Vandhiyathevan.”

On the Princess’ request, Sendhan Amudhan narrated in entirety what happened between him and Vandhiyathevan.

“How is it that you helped someone whom you had just met, so much?”

“There are some people to whom you take an immediate liking. Vandhiyathevan was one such person. He was so likeable. He did not seem to be a bad person at all.”

“At the same time, there are some people whom you will hate on first look. I had one such person in my cell until some time back. Thankfully, soldiers from the Pazhuvoor Queen’s guard came and freed him some time back.”

“Hmm. Is that so? And why is it that you have so much hatred for this man?” exclaimed the Princess.

“This person said he was the son of a Vaidhiyar from Pazhayarai. Apparently, he and Vandhiyathevan had gone down to Kodikkarai together. He spoke badly about my cousin, Poonkuzhali, who lives there. Hence my anger, Princess. But there is one piece of good news that I gleaned out of him.”

“And what is that good news?”

“He says he tried to trick Vandhiyathevan into getting caught by the soldiers sent by the Pazhuvettarayar. Bloody traitor! But thankfully, Vandhiyathevan escaped.”

Both Vanathi and Kundavai exclaimed in unison, “He escaped?”

“Yes. Apparently, Poonkuzhali took him in her boat in the middle of the night to drop him off at Lanka.”

“Young man, you do not look like someone who could have done any wrong. I will ask the Fort Commander to release you.”

“Princess, I request you to grant me some more time. The old man in the next cell has been asking me to teach him a couple of songs. If I do so, he has promised me that he would tell me where he has hidden the Pandiya Coronation Crown. I will learn that secret and then come out.”

The Princess and Vanathi laughed out loudly.

“I do not want you to go mad like the person in the next cell. Then, what will I tell your mother, Vani Ammai?”

The Princess and her entourage left the dungeon. In about half an hour, some soldiers came and released Sendhan Amudhan from the underground dungeon, and guided him to the Thanjavur fort gates.