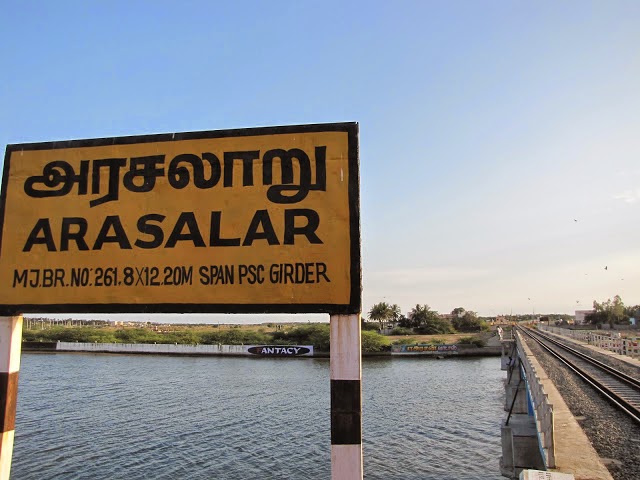 The next morning,Vandhiyathevan made his way along the banks of the River Arisalar, towards Kumbakonam. He had a message from the Chief Minister. He rode his horse slowly, taking in the greenery along the way. He appreciated the hundreds of shades of green that nature provided. Nature seemed to be wearing silk green robes. The paddy in its various stages of cultivation. The trees. The lotus leaves. The green toads along the waterfront. He smiled. He remembered how different the river was when he last rode this way in the Tamizh month of Aadi. The river was flooding, reddish with silt, and flowing with full force. The river was so much more docile now.

There was a dull ache in his heart, and he could not understand why. There were so many more reasons for him to be happy. Every task that he had been given in recent times has been successfully executed. Much more had happened too. He had visited the great cities of Thanjavur, Pazhayarai and Anuradhapuram. He had befriended the love of this land, Prince Arulmozhi, and assisted him. Above all, he had found a place in the heart of the Princess of this land. How lucky was he? Yet, for some unexplainable reason, he was sad.

He was afraid if he was indeed worthy of the Princess. He feared that there might be many hindrances on the way. He very well knew that the world was full of hindrances. He had seen magicians like Ravidasan, enchantresses like Nandini, coup plotters like Pazhuvettarayars, disloyal friends like Kandanmaran and Parthibendran, foolish girls like Poonkuzhali and Vanathi, Veera Vaishnava spies and Kalamugar Shaivites, and quicksand pits. He realised that he had somehow crossed all these hindrances.

What he was embarking on was probably the most dangerous task. On one side, there was his short-tempered master Aditya Karikalan, and on the other side, the enchantress Nandini. He wondered if it was even possible to stop the meeting of these two people. He wondered what the Brahmarayar truly had on his mind. Perhaps he just wanted to separate him from the Princess.

He had been told that Alwarkadiyan would join him enroute. Vandhiyathevan wondered when the Vaishnavan would turn up. He had a good opinion of Nambi, and thought that his company would cheer him up on this journey.

He saw a banyan tree ahead of him, close to the water, and the roots looked like dead crocodiles. He immediately recollected that this was the spot where the girls in the Princess’ camp had fooled Vaanathi (and him) with the dead crocodile. He laughed and decided to wait for a bit under the tree, hoping that Nambi would join him soon. He sat down and gazed at the swirling water.

He heard a voice sing – “Kanden… Kanden” – from above him. He looked up to see the Veera Vaishnavan sitting on a branch on the same tree.

“Oho, it seems like you were looking for me. Please come down.”

Nambi, as always, started talking about Lord Vishnu’s praises and how He was more superior to Lord Shiva.

“Nambiyaare. Please stop. I warn you to stop this talk. It is dangerous.”

“Hah! My Vishnu will save me from anyone. Pray tell me the danger though.”

“Some time back, I happened to cross some Kalamugar Shaivites, and heard them talking. They were saying they were hunting to kill Veera Vaishnavites. They mentioned that they wanted to build a platform of your skulls and dance Anandathandavam on it.”

Nambi patted his head. I am sure this head will withstand that.

“I think you should just change your appearance.”

A palanquin rushed past them. It looked like someone royal was traveling in it. They noticed an aide girl walking along with the palanquin carriers.

“Nambiyare, would you know who is in that palanquin?”

“Appane, you should not interfere in matters that do not concern you. Have you not faced enough difficulties by not following this simple rule? There are many people who travel this road. It does not matter. Come on, let us leave.”

“Oho. Looks like the Vaishnavar is a changed man now. Don’t you remember the time, in Veeranarayanapuram, when you asked me to pass on a scroll to a lady in the covered palanquin.”

“Past is past. Leave that.”

“I am on foot. You are on a horse. We cannot travel together. You go on to the Kollidam shore. I will come and join you there tomorrow morning.”

Vandhiyathevan realised that Nambi had more than one task at hand, and had more secretive things to do. He jumped on to his horse, looked ahead, and saw the sky darkening.

“Nambiyare, do you think it will rain today?”

“Appane. I am not an astrologer. The Tamizh month of Aippasi has started. I won’t be surprised if it rains. You go fast and find yourself a good place to rest for the night.”

He kicked the horse into a gallop. Nambi speaking about astrology reminded him of the Kudandai Josiyar. He wondered if he should visit him. His house was on the way. He wanted to double check about Prince Arulmozhi’s predictions. He wanted to check about his future as well. He wanted to know if the difficult task he had set out for, would be successfully completed. When he thought about the Pazhuvoor Rani, his heart skipped a beat. He could not understand her motives.

His horse crossed the palanquin. This time, neither did he strike the palanquin nor did the palanquin hit him. When he passed by, he saw a hand move the screen aside, and he noticed that it was the Kodumbalur Princess Vanathi. For a moment, he wondered if he should stop and talk to her. He decided not to, and galloped on. He remembered what the Princess had told him about Vanathi. When the Princess was surrounded by troubles from all directions, he did not understand where the Kodumbalur Princess was going. He noticed that she did not have a proper retinue and security guards with her.

A little further, he noticed two fierce-looking Kalamugar Saints looking suspiciously at the palanquin. He seemed to recognise them. They seemed like the same people who had spoken to him earlier on the banks of the River Harischandra.

Vandhiyathevan was indeed a bit upset with Vanathi. He thought that she was trying to compete with Poonkuzhali in capturing Prince Arulmozhi’s heart. However, he also knew the amount of love that Princess Kundavai had for Vanathi. If anything happened to Vanathi, the Princess would become immeasurably sad.

But what could happen to Vanathi? Nambi’s advice came to mind – not to interfere in matters that did not concern him. His mind was torn. The sight of the two fierce Kalamugars waiting in a secluded spot, was something that he could not get off his mind.

He realised that he had almost reached the house of the Kudandai Josiyar. It just dawned on him that, perhaps, Vanathi was also headed there. He decided to consult the astrologer before she arrived. He tied his horse to the gate, and walked into the small house.