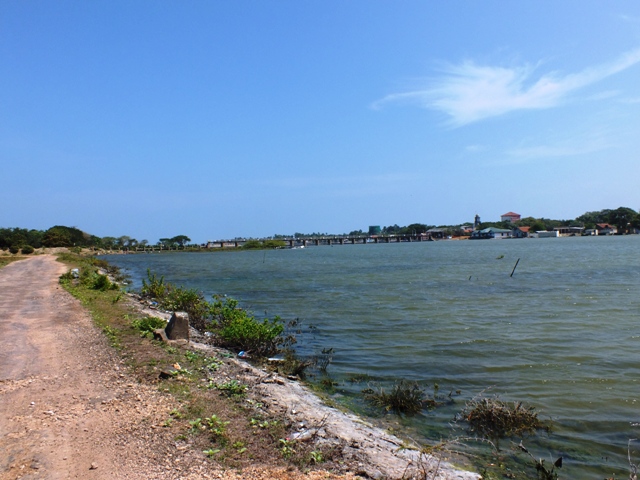 The elephant did not reduce its speed. They passed barren lands, thick forests, rivulets and streams. Poonkuzhali lost track of where she was. She had originally felt afraid. The Prince turned towards her and smiled a couple of times. This calmed her down. She returned to her daydreams. She felt like she was on Airavatham, the famed white elephant of Indra, the king of the devas.

After what seemed like eons, the elephant seemed to slow down. The Prince reached down to its ears and whispered something. The elephant came to a halt near a pond. It gently lowered its front legs and then its hind legs. The Prince slipped down and reached out his hand to help Poonkuzhali come down as well.

The Prince went and sat on the steps of the pond. The pond was filled with lotuses and lilies. Poonkuzhali followed him and sat next to him.

He looked at her, “Poonkuzhali. I like you a lot. Do you know why?”

She blushed pink. Her face now was competing with the colour of the lotuses in the pond.

“Most people want me to behave the way they want me to. You are the only one who wants me to be myself.”

“The General and Parthibendran wanted to delay my journey as much as possible. The General sent word early to the village people to delay my journey. Parthibendran has left to Trikonamalai, so that he can sail down to the Thondaimaan River estuary before I reach there. These people think that I do not know all this. But, thanks to you, I will not let either of these plans stop me.”

Poonkuzhali sobbed. “They are all trying to stop you from being arrested. And here I am, the traitor, taking you straight to them. I do not think I can do this.”

She stood up and started to walk away, and the Prince caught her by the wrist. Poonkuzhali stopped in her tracks. It felt like the devas themselves had sprinkled sandal paste on her. She felt tingly all over. She was in a trance. She slowly sat down.

“Samudra-Kumari, I thought you were much more mature than all of these people. I wanted to tell you something. But, if you are becoming emotional, let us not continue talking. Let us just start.”

“Your impression that everyone else is trying hard not to get me arrested is true. But do you know why?”

“I am thinking it is because of their love for you.”

“You are partly right. The real reason is that – apparently there is one astrologer who has said that I will rule the world. So, these people have already started treating me like an Emperor. Selfish people.”

“What is wrong in that? You are indeed capable of ruling the three worlds.”

“Aha, girl, it looks like you are also one of these people. The palace is the worst kind of prison, and the throne is nothing less than a sacrificial altar. And the cruellest punishment is to wear the crown itself. My elder brother is there to rule the kingdom. I am hearing that my uncle is also wanting to become the ruler.”

“Hmm. It looks like you have also heard that news.”

“You think I did not know? So, the Thanjavur throne has enough people vying for it. I do not want to ascend the throne either.”

“I want to ride elephants like we did today. I want to sail across the oceans. I yearn to discover new lands. New islands like Lanka abound across this ocean. Someday, I would like to scale the highest mountain peaks.”

She asked again, “Would you take me to all those places?”

“Let us see how many of these become true for myself. And then, let me think about whom to take along.”

“Why do you, then, want to go to Thanjavur?”

“That is what I wanted to talk to you about, but you made me digress so much. Tell me something. Do you know of a deaf and mute lady who keeps roaming like a mad person in these whereabouts?”

“Yes. I do know about her. When I was young, my mother passed away. She was the one who raised me. She is my guru. She is everything to me.”

“Is there some place where she stays permanently? Or is she always roaming around?”

“On the course from Kodikkarai, just before you reach Lanka, there is an island called Boodhatheevu. She lives in a rock cave there. That is where I saw you first. There are a large number of paintings that she has painted on the cave walls. You were present in one of the paintings. That is why, when I first met you, at Kodikkarai, I was dumbfounded.”

“Hmm. A lot of things are falling into place. Do you then, also know, how she is related to me?”

“I figured that you would be related, but I did not try and find out how.”

She heaved a heavy sigh. “I would most definitely help you, oh Prince. But you could have just told the General or Parthibendran. They would have helped you as well.”

“No. For those people, who are more bent on making me Emperor, this would not be as important. I would also not want to share these private details about my father with them. Samudra-Kumari, I am going to ask you another favour as well. The astrologers who predicted that I would become Emperor, have also said that I would be faced with numerous obstacles. In the event that something happens to me, I would like you to reach this news to the Emperor yourself.”

“Oh Prince! Nothing will happen to you. I am sure you will reach Thanjavur safely. But in case something happens, I will do as you command. Now that you have told me what I need to do, I request permission to leave.”

“And how can that happen? We have not reached the Thondaimaan River Estuary yet. Please tolerate me until then. Once we see the tiger flag of the Chozha ships, you can gladly leave.”

“I would like to see the buffalo of Yama, the God of Death. I also like to stand at the tip of mountain rocks and watch “kolli-vai” ghosts scream their lungs out.”

“You are an interesting girl.”

“Why are you hesitating? You can call me a mad girl, just like your friend did. I do not mind.”

“I also like to ride my boat on gale storm winds. My excitement knows no bounds when my boat gets tossed from the top of the waves to the abyss at the bottom of the wave. Why, I even loved our mad elephant ride some time ago.”

They had almost reached the estuary of the Thondaimaan river.

“Oh! Where are the ships? I don’t see them now. What would you think of me? Would you not think that I lied to you and brought you here?”

“Of course not. I would never think of that. Why would you want to do such a thing?”

“Couldn’t love be a reason? Why wouldn’t a mad girl like me lure the most handsome, bravest and the most sought-after bachelor in this part of the country?”

“Perhaps, if the General was here, he might have thought so. But I know you too well by now. People like you and me will not have such thoughts in our minds.”

“Do you have the same thoughts towards Vanathi Devi, who is currently waiting for your return at Pazhayarai?”

The Prince sighed. “Oh yes. I do remember her. My sister and the General are trying to somehow marry her off to me.”

They moved closer to the mouth of the river, where it met the sea, to see if the ships had moved anywhere nearby.

About 300 years before this time, the Lankan Emperor named Maana Varman, had sought refuge in Kanchipuram. The then Emperor of Kanchi had sent a huge force to Lanka, to help Maana Varman regain his kingdom. The force had landed right here. At that time, the estuary had been narrow and shallow. The forces had deepened the estuary and made it possible for large crafts to dock. The river also zigzagged a lot near the mouth, and had dense vegetation on both sides. This made it perfect as a hidden harbour.

When the Prince and Poonkuzhali neared the mouth of the river, and looked harder, they saw parts of a ship that had run aground on to the marshy bank. The sail and the masts were shattered and were lying all around. Poonkuzhali could not believe her eyes. She recognised this as one of the two ships that she had seen a couple of days before.